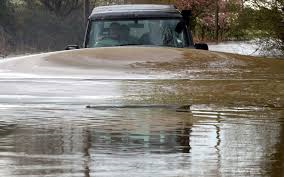 In the last few weeks - intensifying in recent days as the flood waters have moved closer to London - it almost seems as if politicians have only wanted to help clear some of the mud so they can pick it up and sling it at their opponents. It is difficult to hear yourself think amid this cacophony of blame, but it is worth considering what the floods and our reaction to them tell us about the state and public spending.

Despite the usual spin and bluster, it is a fact that spending on flood defences has been cut by this government and frontline Environment Agency jobs have gone including, insiders say, those who worked alongside the emergency services and on flood warnings.

The Conservative chair of the relevant select committee of MPs has said the floods "reinforce our concerns about cuts to the Defra budget". And the GMB on Tuesday said most of the £130million extra funding planned will be spent on capital projects and will save few, if any, of the 1,700 jobs under threat.

This has been a horrible time for everyone whose home or business has been flooded and there will be no quick fixes for many families. But it is distasteful in the extreme that some on the right are preying on their misery by saying the only way to help is by cutting foreign aid that supports poverty-stricken and war-torn families around the world.

This rob Peter to pay Paul mentality is nothing new, but it exposes the absurdity of those who hanker for a smaller state. The idea that "our people" - whether our country or our constituents - are more deserving than others is not only crudely selfish, it also makes no sense.

Arch Tory Jacob Rees-Mogg is not waiting for "the market" to step in and pump out his constituents' homes, or drain the fields or rebuild battered walls and fences. No one in these communities is crying out for G4S or Serco to come to the rescue; they're asking for the state to help, in the form of the Environment Agency experts, the police, firefighters, local government officers and the armed forces.

For the likes of the privileged, Eton and Oxford-educated Rees-Mogg, the consequences of a smaller state are perhaps becoming apparent for the first time. But elsewhere, in the real world, others are painfully aware. A report on Wednesday revealed two-thirds of households affected by the bedroom tax are in rent arrears and one in seven families face losing their homes. The National Housing Federation said its survey demonstrated the bedroom tax was "heaping misery and hardship" on already struggling families.

Much has been made of what David Cameron actually meant when - in a desperate bid to claw back some political capital in the flood-hit Tory heartlands - he insisted that "money was no object" in dealing with the fallout. But the more revealing part of what he said was that "we are a wealthy country". And, as if to reinforce the point, we learned on the same day that all of a sudden there was £2.5billion available for some new fighter planes.

Unions have consistently made the point that we are a wealthy country, that there is no need to force people out of their homes and to drive more people into poverty. We have also consistently warned about the real dangers of cutting public spending, and we have been consistently ignored.

The floods have exposed the gossamer thin argument for austerity and the cold, cruel ideology that underlies it. The inescapable truth is that we all rely on properly funded and resourced public services - maybe not directly every minute of every day but, nonetheless, all the time, because the alternative means abandoning people when they most need our help.
By Mark Serwotka General secretary of the Public and Commercial Services union and first published at The Huffington Post