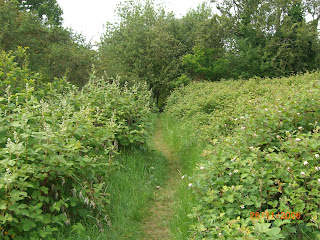 The plant aims to cater for refuge from at least seven north London boroughs although the NLWA may be scaling this back, to just three boroughs to begin with. The plan is lodged with Haringey council’s planning committee now and I’ve just heard that consultation has been extended to 8th July this year (which fulfils to some extent one of the party’s criteria for opposing the site at this stage).

Local people have formed the Pinkham Way Alliance (PWA) to oppose the plan, and if you wander around the streets closest to the proposed siting of the plant, you will be left in no doubt that opposition is strong. Although fifty years ago it was a sewage works, the site itself is a grade 1 conservation site now with rare plants and bats in residence. This piece of wild land is a buffer for residents from the pollution spewed out by heavy traffic on the North Circular and is in effect the lungs of the area. This plant will not only take away this buffer, but will also add to traffic emissions and some incineration and Mechanical Biological Treatment (MBT) methods will make matters even worse.

Haringey Green party, whilst welcoming some of the treatment technology and recycling facilities proposed in the NLWA plan, as being better than current landfill methods of dealing with our waste, has set out seven criteria which need to be met before any such development should receive planning permission. They are as follows:

1. The plant is on a much smaller scale, such as the MBT facility in Salford.

2. Air quality is rigorously monitored, and this is incorporated into the contract.

3. There is no incineration.

4. Workers are all paid a London Living Wage.

5. A full environmental impact assessment is carried out before the plant is approved.

6. Reduction of waste arising from households, businesses and fly-tipping, year on year, needs to be a contractual requirement (that is, they have to devise some mechanism perhaps by paying the waste collection companies or the local authorities to do intensive and successful public education work, whereby the MBT plant operator doesn't just pass the buck by sending the waste somewhere else, or meeting a pseudo-target to cut household or business waste which happens in practice to mean more of it gets fly-tipped instead).

7. There should be full and transparent public consultation before any planning permission is granted. The consultation process should be agreed with local concerned community groups and should include public meeting(s) with the opportunity to question the waste authority.

It is hard to see NWLA or the private contractor who will run the site meeting these requirements as the pressure will be on to maximise profits and claims will be made that the plant would be ‘uneconomic’, but we will see in due course. Ideally, each borough (or perhaps two neighbouring boroughs) should have their own waste management centres, to cut transportation distances and so traffic emissions. But at the end of the day, it will take a huge cultural transformation in the way we package consumer items and a return to reusing bottles, jars, bags etc to have a truly sustainable waste policy.
Posted by Mike Shaughnessy at 03:12 1 comment: 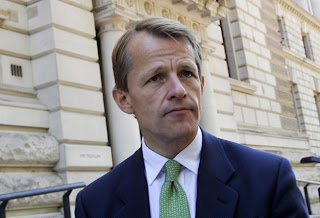 Another day and another set - back for the embattled Lib Dems. David Laws, MP and former ConDem coalition Chief Secretary to the Treasury, is likely to be suspended from Parliament after the Parliamentary Commissioner on Standards investigation found that he was ‘guilty of a series of serious breaches of the rules, over a considerable time’.

Laws has apologised to the House of Commons and paid back over £50,000, whilst continuing to insist that he was not motivated by financial gain, but wanted to keep secret that he was having a gay affair with, incredibly, a political lobbyist, James Lundie. This excuse is a bit far fetched, when these days even Tory MP’s are quite open about their sexual orientation. Who really gives a damn about what Laws does in bed?

The issue is not about secrecy anyway, it is about making fraudulent claims on the public purse, after all the bad publicity of recent years, here is another MP with his snout in the trough. John Lyon, the Standards Commissioner ruled that over seven years Laws deceived the Commons authorities by submitting claims to pay a ‘landlord’, James Lundie, with whom he had a relationship. Basically, he was claiming, and above the market rate by the way, for staying over night at his lover’s house. Laws also claimed for other costs, such as maintenance work, that would normally be included in the rent of a genuine lodger.

Despite all the expense scandals of recent times, MP’s just don’t seem to get it.
The public are quite rightly furious over this type of behaviour, but MP’s just seem to try and shrug it off, with pathetic excuses. All of this after the clear out of corrupt politicians at the General Election last year, and promises from the new government of a zero tolerance policy to breaches of integrity by MP’s.

Laws of course is desperate to get back into the Cabinet, and Nick Clegg is equally desperate to have him back, to try and shore up the Lib Dem side of the coalition, but this is just another grave error of political judgement from Clegg, who can’t seem to get anything right these days.

The very thought of Laws being allowed back into the government after his behaviour, a government that is slashing public services left right and centre, with the mantra ‘we’re all in it together’ is an insult to the British public. I suppose they could give him the job of cutting people’s benefits when they cohabit a couple of nights a week but claim single separate benefits?

Laws should not be allowed back into government, and he should get more than seven days suspension from Parliament, he should be arrested and charged with fraud, and probably sent to prison. Then justice would be seen to be done, but instead we will likely have to put up with his whinging about privacy, until he is rehabilitated back into the government in year or so. Here’s a government that is hypocritical and rotten to the core.
Posted by Mike Shaughnessy at 13:46 No comments: 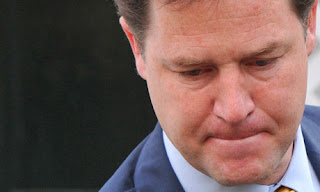 Last Thursday was a voting extravaganza for the people of Britain, with national elections in Scotland and Wales and local elections in much of England (except here in London) and the nationwide referendum on the Alternative Vote (AV) voting system for General Elections.

Scotland sprang the biggest shock, electing a majority Scottish National Party (SNP) government in the Scottish Parliament, under an election with a proportional element, designed to specifically stop a majority government being elected. It was a personal triumph for Alex Salmond the SNP leader, who is far too crafty for Labour’s second division politicians in Scotland. A referendum will now be held on Scottish independence but if it were to be held tomorrow, it would undoubtedly be defeated. But Salmond is too skilful a politician to fall into that trap, and the vote will not be held for at least two years, by which the time the full horror of an English Tory government will be apparent, and with the election boundaries changed in the Tories favour, the Scots may conclude that they will be better going it alone. It will be interesting to watch how this situation develops.

In Wales, Labour did pretty well at the expense of Plaid Cymru and the Lib Dems but fell just one seat short of an overall majority on the Welsh Assembly. The Green party failed unfortunately to land a first Assembly Member that was hoped for.

Local elections in England went surprisingly well for the Tories, gaining councils and seats, when they were expected to take losses because of the austerity programme introduced at national level. Their gains though were almost entirely in the south of England, and they didn’t have much to defend in the north. The Green party continued its modest progress with a net gain of 14 councillors and the Greens are now the largest party on Brighton and Hove council.

But the big story in England (and Wales and Scotland too) was the collapse of the Lib Dem vote. The scale of their losses is truly staggering. They lost almost 700 councillors which is over a third of the seats they were defending. They will take some comfort from gaining 15% of the vote in England, but it has to be remembered this was on a low turnout, so they would be highly unlikely to get this high a share in a General Election.

All of this was compounded by the decisive loss of the AV referendum (by a 2 to 1 majority) which the Lib Dem leadership had hoped would be seen as vindication of their entering of the coalition government with the Tories. The decision to go into coalition now looks to be a terrible error of political judgement and they have been well and truly stitched up by the Conservatives, useful as whipping boys for unpopular policies, but utterly without influence over the government’s direction.
Of course the Lib Dems will try to assert themselves more within the government now, but why should the Tories allow them any influence when they are so unpopular with the voters? They are destined for wipe out at the next General Election and who can say that they don’t deserve it?

The only way that I can see for them making any kind of recovery is if they ditch Nick Clegg as leader, and with a new leader (Charlie Kennedy, perhaps) bring down the coalition over differences in policy. Then they might be able to reduce their losses and even lay the groundwork for a coalition with Labour post election. The alternative will be a slow, painful death, with the reversion of thirty years of incremental gains and a return to the political wilderness.

Photo from The Guardian
Posted by Mike Shaughnessy at 13:56 1 comment: