I was at a well attended local meeting of the NO2ID campaign the other night. This was the first meeting of the group locally here in Haringey, although a national campaign has been running for some years now.

The ID scheme isn’t just about identity cards. A huge database is being constructed to keep tabs on everyone in the UK. People will be obliged to give notice of any change in their registrable facts and such things as NHS appointments and MOT tests will require identity verification and therefore appear in the audit trail. Anyone newly applying for a passport, or renewing an existing one, will automatically have to be interviewed. The Home Office has the power to record personal information on the database without informing the individual. But, there is no duty to ensure that such data is accurate. The state gets control of your personal information and you have no means of checking whether it is accurate or not.

And it doesn’t end there. We heard at the meeting about children as young as five having their fingerprints taken at school often without parental consent and an operation in Yeovil where pub landlords are forced to check customers’ fingerprints, before serving them a drink. Is this the sort of society we want to live in?

The Green Party supports this campaign because we believe that the ID scheme has serious implications for civil liberties, will not deliver the benefits claimed by the government, in terms of reducing crime and terrorism and is a huge waste of money. The £5 billion cost of the scheme would be better spent on real crime reduction initiatives such as employing more police officers and having more local police stations.

The local NO2ID group will be running a stall in Crouch End (outside Budgens) from 12pm to 3pm on Saturday 27 June and their next meeting will be on Wednesday 8 July at 8.15pm, venue The Gate pub, opposite Alexandra Palace railway station.

More information on the campaign here www.no2id.net
Posted by Mike Shaughnessy at 12:21 No comments:

Turn Out 32.4%
So we finished third in Haringey, beating the Tories into fourth place. Great result.
Posted by Mike Shaughnessy at 10:59 No comments:

Decent Homes - One Year On 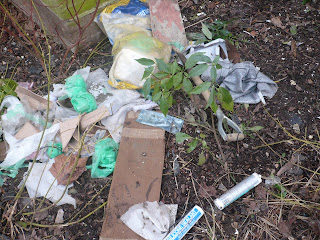 Yesterday I attended the Homes for Haringey Review of Year One of the Decent Homes programme. The programme is intended to bring the council homes in the borough up to the Government’s ‘Decent Homes’ standard – which is in fact quite a low standard, but would be an improvement on how things currently stand in terms of living conditions for many residents.

Claire Kober, leader of the Council, told us that whereas a year ago 42% of council homes were ‘non-decent’ (should that be indecent?!), that figure now stands at 36%. Almost 1,600 homes have been brought up to the Decent Homes standard, many benefiting from new external doors, new windows, kitchens and bathrooms, plus some other improvements.

Sounds promising. We then heard from each of the four contractors who have been assigned the job of doing the work: Apollo, Lovell, Mullaley and Wates Living Space. I was particularly interested to hear from the latter contractor, as readers of this blog will recall I posted a piece here in February about Norman Court in Stroud Green. It was the weekend and the block was part way through having the contractors in to do the work. Heras fencing, equipment and building materials were splayed all over the grass, along with litter and other waste.

The representative from Wates Living Space told us that their surveys showed that 97.5% of residents were satisfied with the work that had been carried out. Conversely, however, he claimed that, and I quote, “Tenants moan like buggery.”

Homes for Haringey are trying to encourage the contractors to ‘do their bit’ for the community. Wates Living Space held a community day last year at Carlton Lodge, which the above smooth-talker claimed was “a bit half-hearted if I’m being honest.” They plan to do better this year.

I stood up and asked what the procedure was for ensuring that things were left tidily and safe on a night and at the weekend. I was told that there “should” be a tick-sheet, but that “I am sure you are now going to tell me that isn’t happening.”

I confirmed that was indeed what I was going to do. I held up some photographs (one of which is posted at the top of this piece) of the mess at Norman Court on Sunday 8th February. I showed them briefly to the audience and then took them up to the front to give to the Wates Living Space representatives. One of them came and spoke to me later and said that things would be improved. Sadly too late for Norman Court residents.

All four contractors spoke of improving communication with residents. A resident of Norman Court I spoke to a few weeks ago complained to me that the tone of the letters had been aggressive and demanding from the start, and that coordinating access to the flats with the builders had been a logistical nightmare.

Another area the contractors have fallen short on is the amount of local people they have managed to employ. Obviously it makes sense to employ local people on many levels: it boosts the local economy, it means less far to travel for workers and local people have local knowledge – always helpful.

In terms of environmental impact of the Decent Homes programme, it was all very vague. Wates Living Space boasted that they had been voted 29th in The Sunday Times Best Green Companies list, and that only 5% of their waste actually went into the ground. (I take it that 5% doesn’t include the stuff pictured above outside Norman Court!).

Many residents had their chance to speak today, although they were often fobbed off with stock answers. It’s good to see residents coming out to have their say – I’d like to see more people involved in this way. I just hope we were listened to and that the second year of the Decent Homes programme goes more smoothly.

Maybe there’s something to be said for being on the final year of the programme – my estate won’t be touched until 2012. By which time the contractors will be exemplary in every aspect, I’m sure…
Posted by Sarah Cope at 15:53 No comments:

How green are the Liberal Democrats?

As a Green I get very annoyed by political parties' green claims when it's so often just wordy greenwash, not backed by action. For example, Liberal Democrat environment policy is one of the great enigmas of modern British politics. The Lib Dems so often proclaim good policy, and so commonly don't stick to it. It wouldn't be unfair to say that what's most consistent about them is their inconsistency. And they have remained true to this principle historically.

Back in the 1990s Paddy Ashdown's Lib Dems wanted a moratorium on roadbuilding. But they wholeheartedly supported the Newbury bypass, the Batheaston bypass, and so on, right up to the M74 extension in Scotland. This year Norman Baker has been saying a Lib Dem government would stop spending on roadbuilding; but his colleagues in Lancashire are still supporting the Lancaster northern bypass. They have spoken in favour of congestion charging nationally, but against it in Edinburgh, Manchester and York.

They have a tendency to say one thing at the national level and do something else at the local – though not consistently. In the 2002 local elections the Lib Dems lost control of Sheffield council by arguing for a new incinerator, and gained control of Hull by campaigning against an incinerator. They currently support incinerator projects in Exeter, Plymouth and Barnstaple, and also in Essex, despite having proclaimed support for a zero waste strategy – which means no incineration.

They want a zero carbon economy by 2050 – in principle. But they have opposed windfarm proposals in Cornwall, Cumbria, Devon and Worcestershire. In Lewisham they recently voted against a Green party budget package that would have insulated 25,000 homes for free. And when it comes to aviation, the fastest growing source of greenhouse gas emissions, it varies.

The Lib Dems have opposed the expansion of Heathrow, but have been happy to expand Birmingham, Carlisle, Exeter, Liverpool and Norwich airports. They were wildly enthusiastic about Manchester airport's second runway – except in Stockport, which lies under the flightpath. And then, having supported a £172m second runway, doubling Manchester airport's business in the space of a decade, the local Lib Dems have recently been campaigning against a new airport warehouse, in order to save a local cottage. The Save Rose Cottage campaign features in their local publicity as an example of their environmental credentials.

I have to say they really don't get it. In January this year Norman Baker was complaining, quite reasonably, that British rail passengers pay the highest fares in Europe. Then he said his party would improve matters by freezing UK rail fares. (At the highest level in Europe.)

It seems the Lib Dems know much more about pursuing the Green vote than about pursuing Green policies. In their "green tax switch" announced last September, they promised to "cut income tax and switch to green taxes on pollution instead". No serious Greens would contemplate this. We rely on income tax to fund schools, hospitals and public services. If we replace this funding with eco-tax revenue, then either we have to rely on keeping the pollution going, so as to keep the revenue coming in, or else we have less money for schools, hospitals, public services and so on.

No, they don't get it, and that's a huge annoyance to those of us who do.

Posted by Mike Shaughnessy at 13:14 3 comments: