Caroline Lucas, leader of the Green Party (England and Wales), was on the panel on BBC TV Question Time on Thursday 18 March. And what a refreshing change she brought to the show.

Being a bit of a politics junky, I hardly ever miss this programme, but am usually left shouting obscenities at the screen, as a panel of five right wing politicians and journalists pontificate on questions from what the BBC describes as a ‘balanced’ audience. To be fair, the audience tend to be the most interesting thing about Question Time, but being from Wythenshawe myself (where the show was filmed), I thought the audience was not really representative of the area. Where the BBC managed to find so many Tory supporters from around there, is beyond me.

Anyhow, we had the usual dreary line up of right wingers (a possible exception, in Charles Kennedy, ex leader of the Liberal Democrats), peddling the same old establishment nonsense that we have become accustomed to. Some weeks the non professional politician panellist is of a left persuasion, but this time we had the historian and broadcaster David Starkey, who is as reactionary as they come.

I was therefore pleased to see that Caroline struck a clear left wing tone, which is mostly absent from the professional politicians that appear, even though I suspect it has a fair amount of support amongst public at large. Talking about the British Airways industrial dispute, which the Tories on the panel were trying desperately to turn into a ‘unions call the shots with this Labour government’ argument, she had a good grasp of the facts of the dispute, and accused BA management of indulging in ‘macho’ tactics. She said Greens in the European Parliament had a ‘fantastic’ record of cooperation with unions, and that she couldn’t see why trade unions gave any funding to the Labour party, as its government constantly attacks union members, and privatises public services to the detriment of users and the employees alike.

The best bit for me though, was when David Starkey interrupted Caroline to say that greens are ‘just’ socialists with a green tinge, and she said, ‘Well, we have socialist principles’. I can’t remember when I last heard the S word on this show said with any positive intent. At last, the leader of a growing party of the left, has had the courage to speak up for trade union members and for the virtues of socialism on the BBC’s national flagship current affairs forum. What a pity that Caroline will not be invited to the General Election party leader debates next month on TV, when Labour, Tory and Lib Dem leaders will lecture us on the need to our tighten belts to pay for the banker’s bonuses, and how we have to pour more money down the drain fighting unwinnable wars in the Middle East.

You can watch the programme here…

Posted by Mike Shaughnessy at 09:54 2 comments:

Elections in the Air 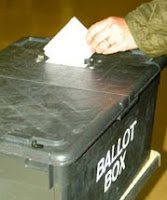 Hopefully, the long cold winter is over. Spring is in the air, and the election season is well and truly upon us.

The bookies have stopped taking bets on the General Election being held on 6 May, I hear. Gordon Brown, the Prime Minister, could yet surprise us, but it does look as though General will be held on the same day as the local elections in London (and elsewhere).

I always expected the national opinion polls to narrow as the General Election got closer, but the speed with which they have narrowed is astonishing. A Tory percentage lead of somewhere in the teens a couple of months ago, has shrunk to maybe 3 or 4 points. A succession of gaffs by the Tories has no doubt helped, but it may just be that unpopular as Gordon Brown and Labour have become, the voters are beginning to think, ‘better the devil you know’. Who would you want making the promised deep cuts in public spending, inevitably leading to cuts in frontline services? Many people will remember the last Conservative government and their hatred of anything publicly owned. As Peter Mandleson said ‘they are foaming at the mouth over the prospect of slashing public spending’.

There appears to be the best chance of a ‘hung parliament’ since 1974, with no party having an absolute majority in the Commons, and the prospect of some kind of coalition government. Maybe, a few Green MP’s could extract some proper action on climate change and other concessions, as the price for supporting a minority government?

More likely, I think, is a minority Tory government supported by the Lib Dems. The Lib Dems are talking an even tougher game on cutting public spending than the Tories, so they wouldn’t be such strange bed fellows. I couldn’t really have seen this happening when Charlie Kennedy was Lib Dem leader, but Nick Clegg, oh yes. He recently spouted his admiration for Margaret Thatcher, and the way that she destroyed the National Union of Mineworkers in the 1980’s. What better right wing credentials are there than that?

Of course, we’re all getting excited about the local elections here in Haringey, where we think we have a great chance of winning our first council seats in Stroud Green ward. Certainly canvassing returns look to be encouraging, and there is still a mood of protest amongst the voters over the bigger party’s involvement in the Westminster expenses scandal. This could play very well for us, as it did in last year’s European Parliament elections.

But more of the local elections later.
Posted by Mike Shaughnessy at 17:19 No comments: