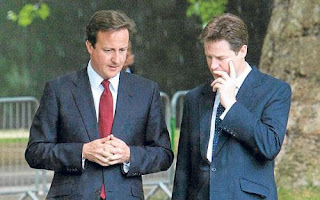 The Independent newspaper reported on Friday 28th January here,that senior members of both coalition parties are thinking of entering into an electoral pact at the next general election.

When I first saw the Oldham East by-election result, I was struck by how well the Lib Dems had done, considering their plummeting opinion poll ratings. The Independent piece though, claims that Tory voters’ voted tactically for the Lib Dems as the best way to defeat Labour. As it happens, Labour won, with the Tory vote down sharply but the Lib Dem vote down only slightly. The reasoning for this put forward in The Independent was Tory voters switching to the Lib Dems, and thus avoiding wipe out for their coalition partners.

Figures in both governing parties are openly suggesting that they should give each other an easy ride in future by-elections and at the next general election, citing the low profile campaign in Oldham East by the Tories, as a template for the future. The thinking is that an anti-Labour electoral alliance could be constructed to keep the coalition government in power for the foreseeable future.

Furthermore, I argued here on this blog, that if the Alternative Vote referendum is passed into law, which is a big if at present, then this will help facilitate the Tory and Lib Dem strategy even more. That is, they will then be able to openly state that their voter’s second preference votes under AV, should be given to their coalition partner. Together with the government’s proposed boundary changes and the reduction of the number of constituencies (those that will disappear are all Labour held seats in inner cities) this could well keep the coalition in power for as long as Mubarak in Egypt.

So, why should the Green party be concerned about Labour being permanently out of government? Well, it is true that Labour are no ‘greener’ than the Tories or Lib Dems, perhaps even less so, and that their social policies were only slightly better than the current government’s when they were in office.

From a Green party electoral point of though, I can only see us getting any influence at Westminster in a coalition or such with a minority Labour government. Labour (members anyway) are closer to Green party social policy than either Tories or the new right wing Lib Dems, and personally I get on better with Labour people than Tories or Lib Dems in general. Despite the last couple of decades, a lot of Labour people still see themselves as on the left politically, which is perhaps more of a gut feeling these days than anything particularly demonstrable, but all the same I think it would make it easier for us Greens to connect with Labour than the other main parties.

As I explained in the previous post referred to earlier, AV would not significantly help a Labour / Green electoral pact, and the danger is that we will be stuck with the coalition in government with no realistic means of ejecting them from office. Also, it will encourage elements in the Labour party to tack even further to right, to try and win over right wing voters, which will lead to us having a permanent reactionary government, even if Labour does gain power again.
Posted by Mike Shaughnessy at 09:42 11 comments: