The Monarchy, The Wedding and Shifting Public Attitudes 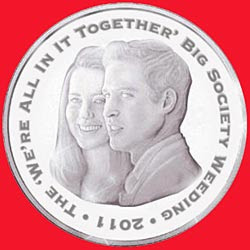 The Guardian newspaper reports a survey in which only 37% of the British public say they are interested in the royal wedding this week.

I should first state that I have been a lifelong republican and that the Green party is a republican party, but this doesn’t mean that I have any feelings of animosity towards Prince William and his future wife, Kate Middleton. I wish them a happy day on Friday, and hope they will have a happy marriage, much as I would do any couple about to embark on such a partnership. Indeed, they have taken their time to get to know each other, since they first met at university, and do seem to genuinely like each other, which has not always been the case with recent couplings.

Republicans are against the institution of hereditary monarchy, which in the twenty first century is a complete anachronism in any democratic nation. It reeks of privilege and the private enclosure of national assets and although the powers vested in the monarch are mainly theoretical and ceremonial, these powers have no place in a modern democratic state.

The Guardian/ICM survey also shows that those people surveyed are still in favour of the monarchy, with 63% saying that Britain would be worse off without the royal family, so there doesn’t seem to be any great clamour for a republic, but attitudes do seem to be shifting if not for abolition, then to a kind of ambivalence towards the royals.

As far back as the 1947 wedding of the current monarch, Queen Elizabeth to Prince Phillip, I have read that the government, in the midst still of public war time rationing, were worried about how the British people would view the opulence of a royal wedding, but it passed off generally as a celebration. I well remember the 1981 marriage between Prince Charles and the then Diana Spencer, and it was everywhere. Millions watched the wedding on TV and there were many street parties and there was a sort of shared national experience about the event. There were quite a few of us proudly sporting ‘stuff the wedding’ badges and I took part in an early morning raid on the street bunting and the strategic planting of anti-monarchy stickers on the day of the wedding. But this small act of defiance was a minority affair, and most people I knew were captivated by the whole thing.

As this survey shows, public opinion has shifted considerably over that time, and future historians may conclude that Diana, Princess of Wales, and the treatment she received at the hands of the royal family, was the greatest republican influence Britain has ever had. Now most people have little interest in the royals, and I don’t expect to see any street parties in this part of north London. The media of course will report millions lining the route of the procession (whatever the turn out) and will manage to find a few street parties amongst the 60 million population, but in reality things have changed for ever.

Most people seem to be more pleased with a having a day off work, and many more people than those celebrating the wedding, will go to the pub, the DIY store, garden centre or supermarket. I shall find a republican event, or maybe I’ll just go to the pub.

Vive la Republic, and all that. I think it’s getting closer.
Posted by Mike Shaughnessy at 09:36 4 comments: