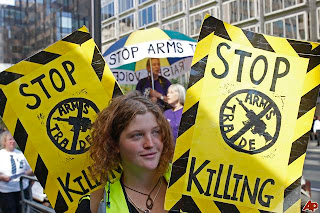 As the people of North Africa and the Middle East rise up against their despotic leaders, the British Prime Minister, David Cameron,has flown into Abu Dhabi where the Index 2011 arms fair is taking place, to perform his salesman act on behalf of British arms and ‘security’businesses. Aerospace Defence Security(ADS)the body that promotes UK arms companies calculates that this market is worth £7.2 billion a year to the British economy, half of which goes to the Middle East.

Liam Fox, the British defence secretary, is reported in The Daily Mail (not a newspaper I normally read, but I received a tip on Facebook) as saying the UK needs a ‘healthy slice’ of this Middle East market. He went on to say 'I want to make sure the United Kingdom - within the limits that we set ourselves ethically on defence exports - is getting a healthy slice of that.’ Well, that depends on what kind of ethics you have, but I can’t see how any right minded person can justify selling the means of violent repression to undemocratic authoritarian regimes.

Denis MacShane, Labour MP and well known apologist for ex-Prime Minister Tony Blair, has been quick to criticise the ‘timing’ of Cameron’s visit to the arms fair in the region, and crass it certainly is, with a hastily arranged detour to Egypt, in an attempt to bathe in the feel good publicity atmosphere surrounding the deposing of autocratic President Mubarak. This mention of ‘timing’ is of course an attempt
to throw a cloak over the last Labour government’s enthusiasm for the same trade, and largely follow the same approach as the present government. The truth is, the UK has long been involved in supplying arms, security and torture equipment to these despotic regimes, all in the name of ‘stability’ in the region, despite the last Labour government’s self- proclaimed ‘ethical foreign policy’.

Which brings us to oil (and gas). Stability of energy supply and therefore price, has been sought by all Western governments so as to facilitate growth in their economies, after the energy crisis in the 1970’s caused ‘stagflation’ and recession, and if that means supporting autocratic authoritarian regimes, so be it. Now that joyous scenes of the people throwing off their chains in the Middle East have been transmitted by Western media, the politicians have been making speeches about freedom and democracy, but we have been instrumental in oppressing these same people for generations.

Indeed, the world oil price has reached a two and a half year high, at over $100 per barrel as this crisis has developed, and Western government’s like our own, are more worried about the effects that this will have on the fragile economic recovery, than anything else that is happening, bar perhaps the rise of ‘Islamist’ governments in the region. There has been remarkably little appetite for a move to this type of regime amongst the rebellious Arab people, but if we did end up having to deal with governments of this persuasion, we no doubt would, to keep the oil flowing. After all, the US government was quite happy dealing with the Taliban in Afghanistan in the 1990’s, when they wanted to build a gas pipeline across the country. Nothing is allowed to get in the way of the business of making money.

You can sign Amnesty International’s petition against the arms trade here.
Posted by Mike Shaughnessy at 04:23

Email ThisBlogThis!Share to TwitterShare to FacebookShare to Pinterest
Labels: arms