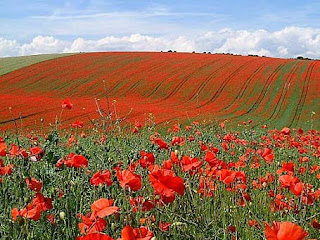 The wearing of a red poppy at this time of year, in the approach to Remembrance Sunday, is a well-established practice in Britain. It is virtually impossible to see anyone on television who is not wearing a poppy, so ingrained has become the convention. Indeed, it seems to me that there is a kind of moral bullying of people, especially if they are appearing on television, to conform to this national ritual.

In recent years, the wearing of a white poppy has grown in popularity amongst those (mainly on the political left) as a way of showing respect to the war dead, whilst at the same time as making an anti-war statement. Personally, I have worn both red and white poppies, but tend not wear any poppy at all, but I do sometimes buy one or the other, and put it in a drawer. I am anti-war, of course, but I don’t see the motive of those displaying a red poppy as pro-war, rather they are bowing to convention with some vague notion of showing respect for those who fought and died, and in the case of the World War 2, in a noble cause.

We have had the ridiculous spectacle this week of the media being saturated with the story of the English and Welsh football teams being denied permission by FIFA, to wear a red poppy emblem on their shirts in football matches this weekend. We must never have played international games on this weekend before, because I can’t ever remember this being an issue before. The Prime Minister even vented his fury in Parliament at the decision, when surely this country has more to worry about at the moment than this issue?

I have to say, I have some sympathy for FIFA’s decision, to ban all political and religious emblems from football shirts. Whatever detractors say to the contrary, the poppy (red or white) is a political symbol. Although most people would agree that World War 2 was a ‘just war’, what about the wars in Iraq, Afghanistan and the Falkland Islands? These wars were highly political and controversial and are seen as so, and in large parts of the world this would cause offence. What if the Argentine football team wanted to wear some emblem associated with their claim for sovereignty of the Falkland Islands?

A compromise was achieved, and the football players can now wear the red poppy on a black arm band, though how this differs from the front of the shirt is difficult to see.

The wearing of red poppies began after World War 1, as a fundraiser for injured soldiers and to show remembrance for those fallen soldiers, in what was a disgusting slaughter of mainly young working class men, sent to their deaths by an uncaring military and political establishment, in the cause of imperial domination. A war that, after four years of millions of casualties on both sides, the winning Allies side, had advanced by less than twenty miles, and inflicted unimaginable horror on those involved and which scarred a whole generation across Europe. It still amazes me that only in Russia, did the people rise up and remove those responsible for this most unjust of wars.

Wear your poppies, red or white, or don’t wear one at all, but remember the conflicting nature of whatever you do. I’ll leave the final word to the great Wilfred Owen, whose poetry did most to inform a nation of the true horror of modern warfare.

Another sighed,-'O Mother, -Mother, - Dad!'
Then smiled at nothing, childlike, being dead.
And the lofty Shrapnel-cloud
Leisurely gestured,-Fool!
And the splinters spat, and tittered.

'My Love!' one moaned. Love-languid seemed his mood,
Till slowly lowered, his whole faced kissed the mud.
And the Bayonets' long teeth grinned;
Rabbles of Shells hooted and groaned;
And the Gas hissed.

Posted by Mike Shaughnessy at 04:45