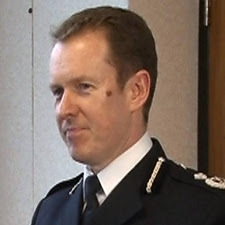 It looked good on paper: a public meeting at the College of North East London (CONEL) on 21 September, arranged by the head of Haringey Council at which the recent riots in Tottenham would be discussed, and suggestions welcomed for how to heal the area. I went with my neighbour - K - who was delighted on our arrival to see a packed hall containing so many of her old friends, activists she'd known and worked with when she lived at Broadwater Farm in the eighties.

The meeting began in a sedate and respectful manner, as we heard the first two speakers: Symeon Brown, who is involved with the excellently-named HYPE (Haringey Young People Empowered), and Sharon Grant, who spoke of the hostility often encountered by her late husband Bernie, and also referred to the possibly dangerous effects of the cuts favoured by our millionaire ConDem masters. The third speaker was Council leader, Claire Kober, to be followed by questions from the body of the hall. It was after Ms. Kober's few anodyne remarks that the feeling in the hall abruptly changed.

First of all, the "Chair" who was in charge clearly had his own agenda i.e. to prevent anyone saying or asking anything remotely embarrassing or challenging. He (one 'Fred Ellis' - who he?) spent the entire time interrupting and barracking questioners; secondly, the vast numbers wishing to pose questions were selected by the handing over of a microphone, which mostly DIDN'T WORK (!!!) so they could barely be heard anyway, unless they shouted.

The first questioner was a woman seated immediately behind us, so we could hear her perfectly. She was also so angry that she could probably be heard in Ealing. Her challenge to Claire Kober was that Haringey Council bore some responsibility for the events of August because of their swingeing cuts to youth services, such as the closing of number ten Broad Lane, which had been a centre for youth-oriented groups, but had been re-assigned by Haringey as commercial offices, thereby hurling the youths onto the street.

Claire Kober stated that the woman was wrong, and that there had been no such closure. The woman erupted in fury, "How can you say that, I WORKED there!" Oops.

Ms. Kober, clearly thinking on her feet, or maybe using them for thinking, suggested that she 'would be around' after the meeting, and would discuss the matter with the woman privately.

Hm. Except this is an alleged public meeting, and the woman's perfectly legitimate question had not been answered, or even addressed, just lied about, while she herself was accused of lying.

And now, suddenly, there was anger in the room. Perhaps Ms. Kober was demonstrating to us how to start a riot? She was fortunate that the hall was filled, not with disaffected youth, but veterans of community spirit and action, and that they were determined to force the 'top table' to confront the underlying causes of the disturbances of August. There were dozens of hands up after this, people wishing to ask questions, but they were all ignored, as the Police Acting Assistant Commissioner got up to make his contribution. Steven Kavanagh (pictured above) looked and sounded like he'd been educated at Eton. He was immediately challenged by a man behind us, who said that he was a 'people's reporter', and that he'd gone to the scene of the riots to witness them for himself. It was self-evident, he said, that the police were only interested in protecting the police station, but that the rest of Tottenham could burn to the ground, for all they cared. There was no response to that either.

Stafford Scott is also involved with HYPE and, despite the attempts of the Chair to subvert his speech, managed to make a very eloquent one, saying that he had not been surprised one bit by the riots, as the young people he worked with had become ever more marginalised by recent policy, both of central government and the council. Stafford had made a similar argument in The Guardian just after the riots. It is worth a read.

He also referrred to the iniquitous 'Stop and Search' laws, and the fact that the rules have now changed so that when exercising it, the police no longer have to indicate the race of their prey. So we will not know in future that 85% of those stopped and searched are black.

My friend K managed, after about an hour of waving her hand in the air, to get to speak, and she challenged the police representatives about their collusion with the media. She pointed out that the story about Mark Duggan shooting at them appeared in the media before even his family knew what had happened. She also pointed out that the story is of dubious veracity anyway, and was nothing but propaganda.

The late and unheralded arrival of Lynne Featherstone MP, and even later one of David Lammy MP, convinced me that the entire farce was a PR stunt, an attempt to pretend that the authorities cared a whit about the riots, or their effects on Tottenham.

I decanted to the foyer outside the hall, and met a fellow who had missed the contribution of the original speaker. He was furious when he heard what had happened, and vowed to accompany the speaker if she wished to confront Ms. Kober later, as he knew well that HYPE had been turfed out of the same address she was referring to. I also met a woman who had recently gone back to work as a nurse after having children and, in the fifteen years of her absence, could not believe the degree to which the NHS has been privatised, "everything", she said, "has already been outsourced". Then there was the elderly gent who came out of the hall saying to me that he had one fervent wish before he died - to see the end of the forty-year domination of Haringey Council by Labour. They think they're untouchable and can do what they like, he said. Yes, I agreed, power corrupts, and absolute power corrupts absolutely. Too right, he said.

I got back to the hall just in time to see Lynne Featherbrain on her feet addressing the crowd. Fortunately, however, she was given the non-working microphone, so nobody heard a word.

On the way home, K asked me what the point of the meeting had been. I didn't know. Why, she said, were we obliged to sit there as if we were in school assembly while we were lectured by the staff, instead of having several 'workshop' groups which might have been more productive. I didn't know that either.

I know that it was a shameful waste of time, and I don't hold out much hope for the achievements of the Haringey Community and Police Consultative Group, if this was their idea of consultation.

We had a similar meeting in Enfield organised by the local MP (who was there from the start). Much more civil and peaceful than yours - but then the Enfield police hadn't killed anyone! Summary at www.n21.net/newsandarticles/45-2011-n21-winchmore-hill-london-articles/436-enfield-and-london-riots-meeting-in-palmers-green.html