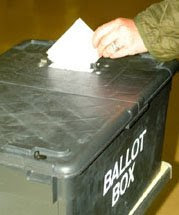 
Yesterday’s by-election in the Haringey ward of Alexandra saw the Lib Dems retain their council seat by a comfortable margin. This was the expected result and demonstrates that they are still strong in the west of the borough.

James Patterson, the Green Party candidate achieved a respectable 7.5% of the poll, and this was only pulled off with a lot of hard work put in by James, pounding the streets and knocking on doors. By-elections are always tough for the greens, as the bigger parties can concentrate their resources on one ward, often bringing in people from all around London, to help them campaign. All in all, not a bad result for us.

The same cannot be said for the British National Party, who polled only 27 votes, a tiny 0.9% of the total vote. Recently they polled only 29 votes in neighbouring Hampstead, so they are pretty irrelevant in this part of north London. Well done to the voters of Alexandra, for rejecting the BNP’s brand of populist immigrant bashing, so soundly.

Posted by Mike Shaughnessy at 05:01