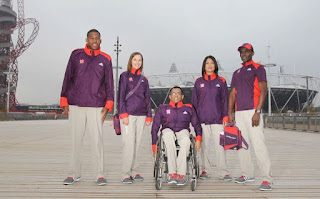 Concerns about the corporate nature of the London Olympics have been reported on this blog here and here. Indeed, for the paltry sum of £700 million, out of a total cost of £9 billion, the corporate sponsors were always in your face, but they did not manage to define these Games in the popular imagination.

Rather, these Games will be remembered for the fantastic performances of the athletes (and especially the British athletes who galvanised the public mood in the host nation) who exemplified the Olympic ethos of sporting excellence and international spirit of friendship, solidarity and fair play. Who can forget that magical Saturday night on 4th August when three British athletes struck gold in one heady hour on the athletics track in the Olympic Stadium?

I was lucky enough to be able to witness this exciting session on television, because I wasn’t working a shift that night, a shift on the Olympics themselves. I was employed on the Games, working on transport at the stadium, as one of the thousands of ‘Games Maker’s’. Although many of the ‘Games Maker’s’ were volunteers some of us have been fortunate enough to be paid for our services, and paid quite well.

Aside from the sport itself, the ‘volunteers’ have been the biggest hit of London 2012, with their good humoured and enthusiastic efforts to welcome visitors and to ensure that the Games went as smoothly as possible. On my team, we had Games Maker’s from all over the country, and one from Germany, all staying with friends and relatives for the duration, and helping to make these Games an unforgettable experience.

On my way to and from work, people would uncharacteristically smile at me in my uniform and often strike up a conversation on the tube, about what my role was, would we win any medals today etc. I popped into one of my local shops on the way home from my shift one day, and was there for about 20 minutes, as everyone in the shop, staff and customers alike, wanted to talk to me. I must admit to feeling a bit of a fraud because I was being paid, when everyone assumed I was an unpaid volunteer. It was noticeable that the loudest cheer at the closing ceremony was for the volunteers.

London’s diverse nature was well reflected in the nationality and race of the Games Maker’s, with all parts of the world represented, symbolising contemporary London and the country at large. One night on my way home from my shift, a group of a dozen or so Games Maker’s in the Olympic Park, completely impromptu, were performing an African chanting and dancing routine to entertain the leaving throngs; and they were surrounded by a large crowd of watching, enchanted visitors. It kind of made me feel proud to be British.

Much talk is now of the legacy of these Games, and there is surely an opportunity now to encourage more people, particularly the young, to engage in sport at all levels. Women’s sport has benefited hugely from getting almost as much attention as the men, and women’s football, watched at times (even when Team GB weren’t playing) by crowds of 60, 70 and 80 thousand spectators, should able to build on this popularity.

But at the end of the day, for me, the legacy will be that over these past couple of weeks, Britain has re-defined itself at last. From the opening ceremony’s celebration of trade unions, the NHS, and the ‘Windrush’ generation, to the multi-cultural make-up of the Games Makers and the athletes, we have displayed our modern Britishness to the world, and indeed to ourselves.
Posted by Mike Shaughnessy at 05:24

Email ThisBlogThis!Share to TwitterShare to FacebookShare to Pinterest
Labels: London 2012

We have heard of an 'I was there' 14k gold plated medal for the volunteers and thought it a good idea. They are being sold on ebay for £5.99 and I have just bought 2 for myself and a friend who helped there.
Gary