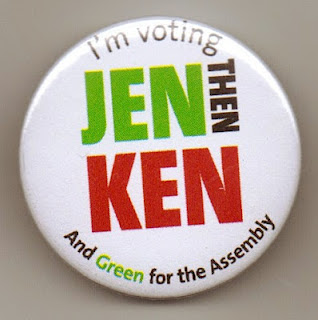 An extraordinary meeting of the London Green Party this week decided to recommend Ken Livingstone as second preference choice for Mayor after first choice Jenny Jones.

Livingstone spoke to around 70 members at the Party’s Headquarters on Leonard Street and fielded questions on his record and policies.

After over an hour of discussion, a vote in favour of recommending Livingstone as second choice carried with a clear majority.

“However, should I not be counted among the top two candidates after the first round, then I want a Mayor who will work with Green Party Assembly Members to deliver on pay equality, less pollution and cheaper fares.

“Ken Livingstone is far from perfect, but we know from his last time as Mayor that we can work with him to make positive changes in a way that would be impossible with either Boris Johnson or many other senior Labour politicians.”

Livingstone said: ”What we are seeing is that as we get closer to the election a broadening alliance of people wants a fairer London.

“The Green endorsement for second preferences is a key building block to winning change on May 3rd. I am very pleased that the Green Party has decided to encourage their supporters to cast their second preference votes for me.
“I look forward to working again with Green Assembly Members, including tackling air pollution, creating a fairer London, and improving pedestrian and cyclists’ safety.”

Discussions focused on the clear desire among members to help prevent a further four years of Boris Johnson’s Mayorship, and the clear differentiation between recommending the Labour Party and Livingstone as a candidate, the man himself frequently opposing Labour Party policy.

Members emphasised that the priority of the campaign was to increase the number of Green's elected to the London Assembly in order to best hold the successful Mayor candidate to account.

However, the meeting voted to support the recommendation after hearing pledges to curb top pay at City Hall, help the lowest paid workers, end cheats and evasions over air pollution used by the current Mayor and Government and financially support boroughs wanting to introduce 20mph zones.

For more information, contact Joe Williams on 0782 5511 927, @earsopen or joe.williams@greenparty.org.uk.
Posted by Mike Shaughnessy at 14:39

Hello, this is a great blog!

We are a recycling company from London and we really do care about the environment. We would really love it if you had a look at our blog and liked us on facebook.