Haringey sends a huge ‘message of hope’ across the world 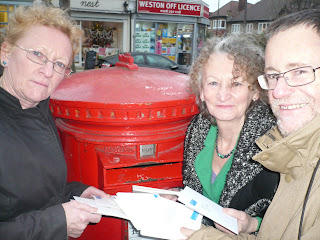 Hornsey and Wood Green Amnesty International again teamed up with Haringey Green Party to send messages of hope to political prisoners and individuals at risk around the world.

The ‘Greetings Card Campaign’, run by Amnesty International each Christmas, is an effective way of highlighting the plight of individuals and groups around the world, and often results in people’s safety being secured and prisoners being released.

On Sunday, residents from across the borough flocked to Stroud Green’s Hornsey Vale Community Centre to sign cards and enjoy homemade mince pies and Christmas cake.

This is the fourth year the event has been held, and this year an impressive 422 cards and letters were signed in total.

Green Party London Assembly member – and Green Party candidate for London Mayor – Jenny Jones was in attendance this year. Jenny commented, “The very simple act of sending greetings cards to these individuals and groups is extraordinarily effective. Receiving thousands of cards from people all around the world gives these victimised people strength and also shows the authorities that these people cannot be simply made to ‘disappear'.”

One of the recipients of the cards this year is Filep Karma of Indonesia who was arrested in 2004 after taking part in a peaceful ceremony. He was sentenced to 15 years in prison for 'rebellion'.

Jenny Jones added, “It was a really special afternoon and we’d like to thank everyone who came along and took part. We can now send our messages of hope across the world – and they really will make a difference.”
Posted by Sarah Cope at 02:03