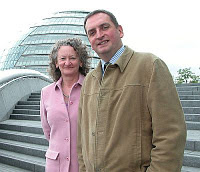 The elections for the London Mayor and London Assembly are on the 3rd May next year (2012). The Green Party campaign for these elections has begun, with a leafleting operation across London, and we in Haringey are in the process of leafleting our five best Green voting wards. Come the new year, the campaign will get into full throttle, in what promises to be very important elections, not only for London, but by reflection, for the rest of the country too. These elections can set the tone and context for national elections, to some extent.

So, it seems appropriate to list some of the key achievements of the Green Party Assembly Members over the last eleven years:

At the first ever Mayor’s Question Time Darren Johnson called on the Mayor to introduce a registration scheme for same-sex partners.

What happened next? A successful scheme was introduced, paving the way for civil partnerships legislation at national level.

Greens began campaigning against Ken Livingstone’s plans for a new six-lane road bridge. As a price for supporting the Mayor’s 2005 budget the Greens called for the mayor to fund the objectors in order that the environmental case could be properly presented at the public inquiry.

What happened next? The public inquiry failed to give the go ahead for the bridge and the new Mayor Boris Johnson then abandoned it altogether.

What happened next? In a series of budget deals with the then Mayor, Green AMs got the climate change budget at the London Development Agency increased to £8 million per year.

As part of a budget deal Greens called on the Mayor to establish a Living Wage unit to tackle poverty pay in the capital.

What happened next? The GLA and a growing number of public and private sector bodies now pay the London Living Wage as a minimum.

An investigation led by Darren Johnson highlighted the fact that a third of London’s drinking water was lost through leaking mains pipes.

What happened next? Following pressure from the Assembly Thames Water began a major mains replacement programme.

Jenny Jones commissioned a report which led to the setting of a target to increase cycling by 400% through the introduction of cycle hire, cycling superhighways and cycling hubs in outer London.

What happened next? The Greens AMs secured budget commitments from Ken Livingstone which led to a tripling of the budget for cycling and walking.

Darren Johnson led the Environment Committee investigation into Heathrow expansion. The report showed that the economic benefits were exaggerated and the environmental impacts understated.

What happened next? In 2010 the new Government abandoned Heathrow expansion, the Assembly’s all-party report playing an important role in establishing a broad political consensus.

What happened next? This unit has now been reinstated within the traffic police section.

For the Assembly’s Planning and Housing Committee, Jenny led an investigation looking at what could be done to protect London’s small shops.

What happened next? Mayor Boris Johnson agreed to put policies for the protection of small shops in his new London Plan, the overall planning document for London.

This is an impressive list, especially considering that the Greens had only two AM’s for most of this time. What more could be achieved with another two or three Green AM’s?
Posted by Mike Shaughnessy at 16:53