Banker's Hold the Country to Ransom 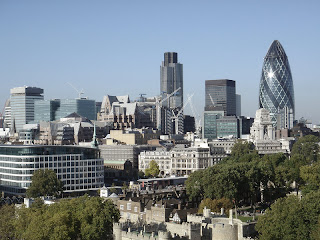 So, according to last week’s economic headlines, George Osborne wants to “ring-fence” retail from so-called investment banking, does he?

Sounds to me very much like shutting the stable door after the horse has bolted or – if you’ll forgive the elaboration of the metaphor – more like having the weary public slaving away to rebuild the stable which has burned down while the bankers are on the horse’s back prancing away and having a whale of a time.

These self-proclaimed “Masters of the Universe” scratch each other’s backs on remuneration committees and persist in their games of ‘Red: we win’ or ‘Black: you (the public) lose’ in the casino merry-go-round that passes for modern banking these days.

It makes you almost want to tear your hair out that no Government, whether Blue, Rose-Red or even Blue-Yellow has the guts (Vince Cable I’m looking at you) these days to take on the vast vested interests in the City of London.

It never ceases to amaze me how often right-wing commentators trot out that old chestnut about how Margaret Thatcher was needed in the 1980s to “tame the dragon” of over-mighty unionism and “unleash” the country’s spirit of free enterprise. Whatever you may believe about whether the unions were a baleful influence in the 1970s (and it is a documented fact that in the 1970s levels of inequality were much lower than at present, national well-being levels at least as high as now and the proportion of GDP that went on wages as opposed to profits the highest ever), the arguments of economic conservatives can now be turned against them with a new twist:

For are not the banks the new “dragons” that now need taming? Are they not a bunch of “financial unions” in bed with what whatever Government comes our way in Westminster? Do they not pervert the course of our democracy – if not over beer and sandwiches in smoke-filled rooms then maybe in the gleaming corporate boardrooms of glassy towers in the Square Mile? Who will be brave enough to come up with tough legislation to save the public from this latter-day breed of robber barons and oligarchic parasites?

For the truth of the matter is that we need the utility parts of modern banks – the parts from where we pay our direct debits and everyday transactions – entirely separated from the casino-habits of the investment banks not just “ring-fenced” within the same mega-institutions (clever bankers and their lawyers will just find cunning ways around that as usual).

When we have a banking sector broken up into smaller units then several things can happen:

1. No more banks “too big to fail”;
2. Many more banks on our high streets competing for our business;
3. The return of local banking: with a traditional Bank Manager who knows local businesses in her area making a comeback and being willing to provide fair loans to businesses down the local high street;
4. If you’re a rich man with money to burn you can still go to a specialist merchant bank and make a risky investment; if your pin-striped stockbroker then loses the lot by overpaying himself and gambling on US sub-prime mortgages well, it’s a tough life, but nobody except you in this scenario has to pick up the pieces.

Chances of seeing the above? Small and receding as I type. But there are things we can do. We can educate ourselves in the principles of a Green economy by reading works such as ‘Prosperity without Growth’ by Professor Tim Jackson. Above all, we can urge our friends to think seriously about changing the habits of a lifetime and voting Green for the first time. We have our first MP and our first Green Council. It doesn’t have to be the same old, same old. We don’t have to settle for Tweedledum, Tweedledee or the Tweedle-Dems. Together, armed with the facts, we can persuade, influence and grow strong. Otherwise, what are the odds that in another 10 years we’ll be glumly hosing down with our taxes the smouldering remains of another burned-down stable, a horse with a grinning banker on his back prancing nearby?