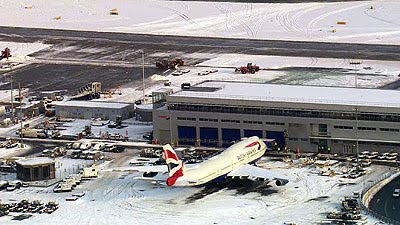 Well, I said that I wouldn’t be blogging for a month or so, but my travel plans have been severely disrupted by the snow at Heathrow Airport on Saturday. I was due to fly out on Sunday, 19 December, but am still here at home in London.

I should say, this being a green blog, that my addiction to flying has been considerably moderated in recent years, once I understood the effects of flying on climate change. But people shouldn’t avoid flying altogether, sometimes it is acceptable, to see loved ones etc. This trip was to celebrate 25 years with my partner, and had been planned for some time, and factored in with a fair amount of abstinence from flying over the last couple of years.

Anyway, we have now been rescheduled to fly from Heathrow on 27 December, a full eight days after our original booking. We had the offer of a bus to Paris and perhaps a flight from there, but my confidence that we wouldn’t be stuck there for days has been dented by the events of recent days.

Firstly, the airline, I won’t mention them particularly because I don’t think they have been any worse than other airline. On Sunday we couldn’t get any information at all from them on when we might fly. On Monday we got through to the telephone number we had been given, but no news. Tuesday was the offer of a bus ride to Paris and onward flight. Today, nothing new, except we noticed that they were still selling flights for 27 December, and enquired if we could be rescheduled for then? After much argument with the call centre, this was agreed, so hopefully we’ll be away then.

The travel agent seems to have closed down, because they never answer their phone. But I put the most blame for this fiasco on the airport authority at Heathrow. British Airports Authority (BAA) who own Heathrow, have been a complete shambles. The excuse is that we don’t get these weather conditions regularly in the UK, but it’s been this way for the last three winters.

The bad weather was forecast days in advance of Saturday, but no plans appear to have been put in place. Heathrow is still running below full capacity as I write on Wednesday night, but for two days hardly any aircraft moved in or out of the airport. Why they were able to get one runway working and not the other for two days is a mystery.

We had three inches of snow and the premier airport in the UK was completely shut down for days, and will take over a week to clear the backlog. Other countries manage perfectly well in these adverse weather conditions, but they put investment and planning into the operation, which BAA has clearly failed to do.

Perhaps a more pertinent example of how crap BAA has been is to compare it to Manchester Airport. Hardly any flights from Manchester have been cancelled, except those flying to an airport where they couldn’t land, like Heathrow. Manchester Airport is publically owned, by the local authority, and seems to have managed much better than the privatised, Spanish owned BAA. Manchester must have fall back equipment and plans that BAA just thought weren’t worth the investment, and would interfere with their main function, making profits.

This is like a microcosm of everything that happens in this country these days. The majority of the country is run by spivs, and everything about publicly owned services is derided as old fashioned and inefficient. Take a look at the fiasco at Heathrow and tell me how much better this is than a publically run airport like Manchester.

Posted by Mike Shaughnessy at 04:50

Email ThisBlogThis!Share to TwitterShare to FacebookShare to Pinterest
Labels: privatisation

I believe there are parts of our daily lives, post, trains, buses etc. That are by their very design a public service in that they are incapable of making a real profit without severe impact to the quality of service and in the case of transport loss of life through cost cutting corners.

I agree with you Verity, but the contemporary wisdom is the complete opposite. How can we change this perception? By publicising them as a first step, on blogs, message boards etc.