The Strange Case of Popular Austerity 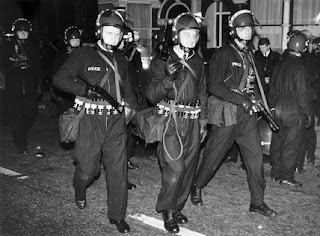 A recent poll commissioned by the BBC http://www.bbc.co.uk/news/business-11181833 showed that 60% of British voters are in favour of severe cuts to public spending now, to reduce the country’s budget deficit.

It does amaze me that the ConDem government, has managed so easily to focus public attention away from the causes of the budget deficit and onto public spending and general belt tightening. The Labour government did contribute to unnecessary public spending such as, PFI’s and PPP’s, but this was pioneered by John Major’s last Conservative government in the 1990’s. And, the huge sums spent on military adventures and retaining an out of proportion nuclear arms capability, were both supported by the Conservatives. The main reason that the public finances are so in the red though, is because the banks were, well bankrupt, and this debt fell onto the taxpayer. The Conservatives were advocating even greater liberalisation of the financial services industry than the then Labour government, so I can’t see how a Tory government would have avoided this recession, and the resultant loss of tax revenues that this caused. Nevertheless, the tactic of putting all of the blame on Labour seems to have worked so far.

But there you go, they appear to have convinced the public that this recession was all the fault of too much government, when in reality it was caused by too little government intervention in the private sector, which is now envisaged as rising phoenix like from the ashes to save the nation in its time of need. A strange kind of logic indeed.

Interestingly, the same opinion poll registers public hostility to cuts in public services, particularly health, education and defence, at the same time as approving of sharp reductions in spending. This hostility will surely grow as the actual cuts are made, because 25% spending reductions in services cannot be made by cutting ‘waste’. Frontline services will suffer severe cut backs, and when people feel these, in their day to day lives, I think the mood will change.

These cuts will be extremely damaging to our public services and to service users, but perhaps even more importantly, spending cuts at the pace advocated by the coalition government, endanger the fragile recovery in the economy. It has come to something, when the Institute of Fiscal Studies (IFS) has questioned the fairness of these cuts, with the heaviest burden for budget deficit reduction falling on those least able to shoulder it, and the International Monetary Fund (IMF) suggesting that spending reductions should not be implemented too quickly, as they might throw us back into recession. These organisations are hardly bastions of left wing thinking, and I read today that even Boris Johnson, Tory mayor of London, is quoted as saying the government should be careful not to make spending cuts at the speed the coalition is demanding.

I expect this return to the Thatcherism of the 1980’s will lead to exactly the same outcome. That is, underfunded and extremely poor public services, which in turn will lead to wide scale social unrest. At least Thatcher had the foresight to increase police numbers and pay, in readiness for the unrest, but this government wants to cut the police force too. Turbulent times ahead, I think.
Posted by Mike Shaughnessy at 14:02

Email ThisBlogThis!Share to TwitterShare to FacebookShare to Pinterest
Labels: ConDems