'The Power of Community' and Transition Towns 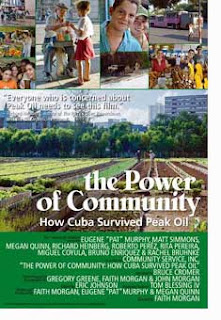 On Saturday night, members of Haringey Green Party attended the Crouch End and Hornsey Area Transition Initiative (CHATI) film showing of ‘The Power of Community’, a film about how peak oil affected Cuba. The event was very well attended, and the audience was left with the question: how can we translate what happened in Cuba to the local area?

Cuba of course faced the peak oil crisis in the early 1990’s, during the so-called ‘Special Period’ in their history. With trade embargoes meaning no oil, medical supplies and other essentials, and no access to the world bank, food shortages and blackouts were common. The people of Cuba had to quickly re-think their lifestyles, turning to bicycles for transportation and to growing food on every available piece of land – even on rooftops.

Now 80 to 100% of food needed by city dwellers is provided by urban gardens, and these same gardens employ 140,000 people. Green jobs in action.

Furthermore, there was no access to pesticides during the special period, and organic farming became the norm. 80% of farming in Cuba is now by organic methods. Inspiringly, farmers supply free produce to pregnant women and older people, not because they are told to do so, but simply because they want to.

The health of Cubans has improved greatly since the ‘Special Period’, due to an increased intake of fruit and veg. That’s certainly a lesson us Brits could learn from, since we are in the midst of an obesity epidemic.

The above makes it sound like the crisis led to Cuba being some sort of Utopia. Of course, this is not the case what with human rights violations and lack of democracy as well as issues with dilapidated housing in cities such as Havana. Indeed now that the country has oil again (much of which they get from Venezuela, in exchange for doctors), many people have reverted to their cars. Old habits die hard.

But it was an inspiring film insofar as it shows what can come out of a crisis if people pull together and take small steps towards a big solution. That is really the ethos of Transition Towns – the community working together to find solutions to working out how we will survive in a post-oil world. It is frightening how things will change in our lifetimes, but we can view the future as a challenge rather than as a threat. And we can learn from places like Cuba now rather than wait until a crisis is upon us before we act.

Email ThisBlogThis!Share to TwitterShare to FacebookShare to Pinterest
Labels: environment

The "Power of Community" is a powerful case study that demonstrates we can kick our oil addiction and be healthier, too. The average Cuban lost 20 lbs. by going low-carbon!

Keeping chickens and growing a garden are other ways to go local.